We have created this page to give you an idea of the massive construction effort BNSF is taking in North Dakota to expand capacity along the Hi Line. The following trip report will give you indication of what is happening. This construction will ultimately alleviate, we hope, the persistent timekeeping problems with the Empire Builder and provide better freight service.

The BNSF 2015 construction season has begun. 6 billion dollars are being spent to upgrade and add capacity all over the railroad. Several of these projects will benefit the Empire Builder. Within Minneapolis itself the BNSF is adding a second main from Minneapolis junction (where the line to Willmar connects) through Union Yard to St Anthony tower (where Amtrak turns off the BNSF and onto the Minnesota Commercial). This will help keep Amtrak and certain freight trains from interfering with work at the BNSF Midway Hub Center.

Here is a photo looking East from the 15th street pedestrian bridge in Minneapolis. You can see where the sub grade has been exposed in order to lay the new track.

And a view looking west from the same foot bridge.

In late September 2014 your President, Brian Nelson and Treasurer, Bob Moen, went to North Dakota to see firsthand why the Empire Builder is running so late and what can be done about it. What we found was an army of men, bulldozers and equipment stretching across the state. BNSF started rebuilding and re-signaling the line from Fargo-Grand Forks-Minot last year. They expect to have that work done by freeze-up on December 1st. What the Empire Builder will have is a new railroad capable of 79 mph with modern signals, CTC sidings and crossovers. The line across the lake at Churches Ferry has been raised with a new bridge. This line will serve as the second mainline between Fargo and Minot complementing the traditional mainline via New Rockford. That line will also see upgrades and more sidings next year. BNSF is implementing directional running where all the trains on one route will run west and all on the other route will run east. Only Amtrak and a few freight trains will run in both directions on the Grand Forks line once the work is done.

The main work this year was west of Minot where BNSF has been building a second track to Williston on what had historically been a single track railroad most of the way. They have been bulldozing hills, filling in valleys and pushing dirt out into small lakes to build a second track. There are many stretches of the 120-mile route where track is in and operational for 6-7 mile sections. We found a significant portion has been fully graded, shaped and tamped into a roadbed awaiting ties, ballast and rail. It appears that BNSF crews have been trying to grade and shape as many miles as possible before freeze-up and are planning to lay rail, ties and ballast in the winter months when it is impossible to grade dirt. If this winter is severe, this work may have to wait for next spring. As of late September crews were filling in a large valley east of Epping and only a mile or so from the existing double track into Williston, ND. They expect to have 55 miles of double track completed by the end of the year on this segment. This is the biggest amount railroad construction in North Dakota since James J. Hill built the Great Northern in the 1890’s and the Milwaukee Road built across the southern section of the state in 1907.

We came away with the clear picture that BNSF is doing everything physically possible to get the congested railroad in North Dakota unclogged as quickly as possible. The problem the Empire Builder is facing, is the same one all shippers of grain and oil are facing. There is simply too much traffic and too many trains for the railroad to handle. The line is handling almost twice as much traffic as it handled ten years ago and probably 8 times as much as in the Great Northern days of the 1960’s when more passenger trains operated over the route. The fact is that the “pipe” is only so big and only so much can be pushed through it. No amount screaming, investigations or pressure from government entities is going to change that physical fact. Only adding another pipe (track) can fix the problem, which is exactly what BNSF is doing as fast as possible. We are as frustrated as anyone at the terrible on time performance of the Empire Builder, but we do not see any way this can be changed until these improvements are implemented. The day we were there, we observed over a dozen freight trains between Minot and Williston trying to pass each other going opposite directions on single track. Then we watched BNSF move all the freight trains out of the way for Amtrak. As soon as the Empire Builder had passed, the freight train traffic jam resumed.

Next year BNSF plans to finish North Dakota and concentrate on the line from Fargo to Minneapolis to add capacity there. We will keep up the pressure in Washington and St. Paul, but until the track work is done, we do not expect the Empire Builder to return to its traditional on time performance.

Here are some new pictures of the construction:

Here is a slightly tardy westbound Empire Builder at Berthold ND just some 23 miles west of Minot. Here you can see what looks like a road next to the tracks. That is actually the sub grade for the new second main. Note also the new welded rail sticks on the ballast next to the active mainline. While Berthold already had a siding it was left unaltered to become just a feeder track for the oil loading facility there. A completely new second main track is being laid rather than simply extending the Berthold siding to the next location.

In another view at Ross which is 61 miles west of Minot we see a BNSF local in the distance stepping through the construction zone. Note the new signals in the distance which will control a crossover point there. A crossover is just a group of switches that allow a train to move from one main track to the other. Note also the wide right of way and fresh rail laying on the new sub grade waiting for the track laying machine. As of February 2015 the second main is in place and active up to that ‘future’ crossover point in the distance.

Here are some other pictures: 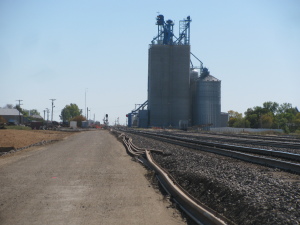 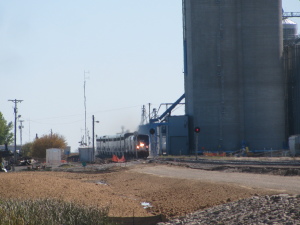 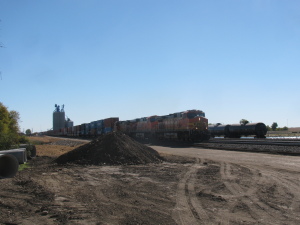 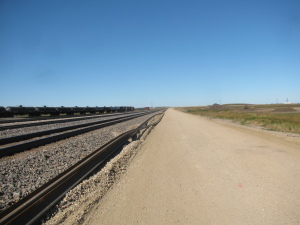 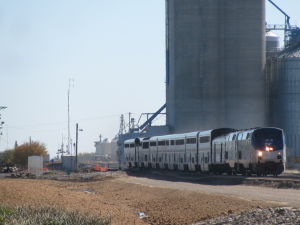 For the price of an airline snack box and beer, you can help further the cause of rail travel across the United States!